This job was building a Quiz Buzzer system for a TV Show. The system has two inputs for the buzzer switches and two 240 volt outputs on relays for switching on indicator lights. The system also has an audio output with a sound triggered for each buzzer. Finally there is a wired remote control panel with LED's to indicate the state of the system and a button for reset. The system is set up so the once a team has buzzed in it locks out until reset from the control box.

It was built for an ABC3 show called Steampunks. ABC Link Review

The system is built around a Freetronics Eleven and a Sparkfun MP3 Trigger. All the inputs and outputs are done though 0.1" header connectors all built up on a Adafruit prototyping board.

I've only got a few in construction photos of this one. 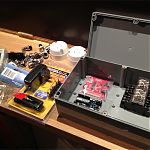 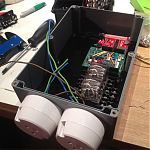 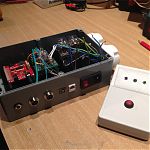 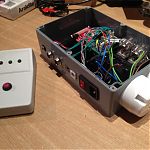 I was working for Alien Proof Construction.

Steampunks TV show was produced by Beyond for ABC3