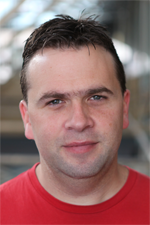 I seem to have a habit of turning interests into hobbies and hobbies into jobs.

In no particular order

I've been playing with the Arduino platform since 2008, both as a hobby playing with LED matrixes, sensor networks etc and at work interfacing buttons, rotary encoders, RFID etc with screen based interactives.

In 2012 I did a bunch of Arduino based jobs with Alien Proof Construction including a animatronic fortune teller, a quiz show buzzer system, LED mask and tracking systems for High Altitude Ballooning (HAB).

I've got a lot of enthusiasm and energy for the whole Open Hardware, Arduino, Maker sphere. I've got some ideas for products and kits i'd like to get up in the future.

I'm a veteran of the first dot com bubble, In the lat 90's early 2000's I co-ran a company Go Nova Pty Ltd doing bespoke CMS solutions in Allaire Cold Fusion. These where the early days of web CMS, before most of the current technologies where around.

I'm currently getting back into web development and have been retooling and building a few small sites.

I've been programming multimedia interactives since the early days of CD-ROM. I was working on SuperCard projects while still at school and programmed in Macromedia Director in the mid 90's.

Nowadays I create interactives for museum exhibitions in my day job at the Historic Houses Trust of NSW. These days i'm using python, OpenFrameworks and iOS

Often these interactive pieces will use an Arduino for extra hardware input.

I started doing live video projection at parties in 1997, over the years my VJ/Video artist hobby got serious; Tesseract Research Laboratories was formed and from 2002 - 2004 I was working full time as a video artist playing hundreds of shows at parties, events, corporate launches, theatre, festivals etc. In 2005 Tesseract folded and I now work under the Native Resolution name.